Blog - Latest News
You are here: Home / Stand-Alones / The Riddle of Shelby Lake

“I’ve spent a lot of time thinking about who I am, because I don’t know where I came from. I’m a mystery to myself.”

That’s what Deputy Shelby Lake tells us at the beginning of my novel THE DEEP, DEEP SNOW. In addition to wrestling with the disappearance of a young boy, Shelby also wrestles with her own past. She was left on a doorstep when she was just a baby, and she never knew the identity of her mother — or why she was abandoned. Those questions have always haunted her.

Shelby’s riddle lingers over THE DEEP, DEEP SNOW, which was an Edgar Award finalist and a New York Times bestseller. Now the answer to the riddle is here.

THE URSULINA tells the story of Shelby’s mother, a woman named Rebecca Colder. When she was just a girl, Rebecca came face to face with what she believed to be a mythical beast called The Ursulina…a monster like Bigfoot or Sasquatch. Ever since, she’s been obsessed with finding the Ursulina again. That quest will become enmeshed with the struggle of Rebecca’s job, life, and marriage — and it will lead her inexorably to the most excruciating choice a mother can make.

This novel may be the most emotional story I’ve ever written. I hope you enjoy the tale of Rebecca and The Ursulina. It’s available now exclusively from Audible — with amazing narration by actress January LaVoy — and the print and e-book editions will follow on February 1. 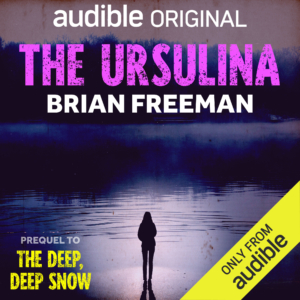