Now that the holidays are passed (and we hope yours were terrific)…our Minnesota winter has arrived…and Brian is once again settling in to a regular routine of writing—particularly important since he’s got three manuscript deadlines in 2020…! A number of years ago, he converted one of the second floor bedrooms in our home into his office…so his daily “commute” is a mere 20 feet down the hallway each day…! Each morning, he heads to his office, I start my daily activities…and the cats settle themselves in various locations around the house. 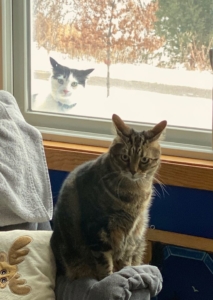 Recently, I had a question for Brian, so I wandered down the hall to his office…and as I passed by one of our windows…I noticed something VERY odd…! In addition to seeing one of our cats looking at me from the chair…there was ANOTHER CAT staring at me…from OUTSIDE the house…! Needless to say, I was shocked…because as you can see…the cat was staring in from a window on the second floor…!

I called out to Brian—telling him that there was something he HAD to come and see for himself. Of course, he was just as surprised as I was to see this cat on our roof…! We knew the cat—a little sweetheart named Loki, who lives at a house down the street from us and likes to patrol the neighborhood—but this was definitely the first time Loki had ever come climbing up to say hello…!

After our initial amusement wore off, we started to wonder how she got up there—and perhaps more importantly—how she was going to get down. Brian went outside and called to Loki—but quickly realized that she wasn’t too anxious to climb down on her own. She’d take a step into the snow on the roof, shake her paw, then come right back over to the window. 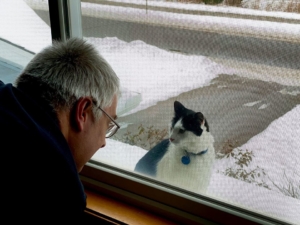 Of course, we have several cat carriers, so Brian finally got one of those, went into the bedroom, closed the door, opened the window, took off the screen, grabbed Loki, and put her into the carrier, then calmly carried her downstairs—past our three VERY curious cats—and across the street to an open area to release her. He opened the carrier and Loki happily hopped out…looked up at him as if to say thank you…then went off on her merry way home.