Blog - Latest News
You are here: Home / Jonathan Stride / In the Dark

This week: IN THE DARK, the 4th Jonathan Stride novel.

When we first met Stride in IMMORAL, he was grieving the loss of his long-time wife, Cindy — and that loss has cast a long shadow over the entire Stride series.

I wanted readers to have a chance to learn more about Cindy and how Stride’s relationship with her developed. So IN THE DARK (which appeared in the UK under the title THE WATCHER) is about the murder of Cindy’s sister, Laura, during a long-ago summer when Cindy and Stride were first becoming involved as teenagers. 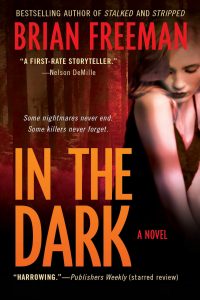 When a journalist comes to town to write a book about that unsolved crime, Stride gets pulled back into a summer that transformed his life — and he must also deal with violence that ripples from the past into the present. Using chapters from the journalist’s story, the “book within a book” format lets the reader see Stride’s past through Cindy’s eyes.

The last chapter of this novel still brings me to tears whenever I read it. And pay close attention to the chapter where Stride and Serena are in his attic as he digs through boxes of photos and letters from his late wife. Many of the fractures between Stride and Serena that break open in the next book — THE BURYING PLACE — are telegraphed in that scene.

One more little secret about this book: In my first draft, the twist ending was totally different! I changed it during the editing process, but there are still lingering hints in the book about the alternate ending. Can you figure out what the original twist was?

Click here to find out more about the book.