And so we come to the most recent Jonathan Stride novel, ALTER EGO…at least until September 22, when the new Stride book FUNERAL FOR A FRIEND is finally released.

I’ll tell you a secret. I originally envisioned ALTER EGO as a Cab Bolton novel. Given Cab’s Hollywood mother, it made sense to have him as the hero in a book that focused on the sleazy secrets of a famous actor. However, the more I thought about it, the more I liked the idea of giving this plot to Stride…so that Stride could deal with an “alter ego” who is filming a movie in Duluth based on one of his cases. 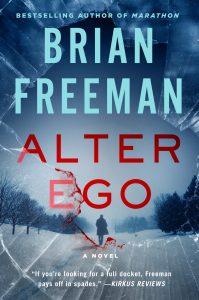 But I couldn’t give up Cab entirely, could I? So ALTER EGO became my first cross-over novel, where Stride and Cab BOTH appear as main characters.

People have asked me whether ALTER EGO was inspired by the exposure of Harvey Weinstein and the eruption of #metoo protests in Hollywood. Actually, I turned in the novel a couple of weeks BEFORE the Weinstein scandal broke in the press. That prompted my editor to ask, “Hey, did you know something??”

So be sure to catch up on all of the Stride books…from IMMORAL through ALTER EGO…because you’ll want to be ready for Stride’s big return in September.